For 20 years I have spent August Bank Holiday on tour with my college old boys team. For the majority of that time, my wife has resented that annual occasion. In recent years, the resentment has found a semantic focus: it isn’t a TOUR! My team’s get-together doesn’t meet my wife’s criteria for a tour: we stay in one place and only play two matches (against the same team, too).

I imagine Andrew Strauss dealing with a similar domestic situation:

The England Captain: Right, I’m off to Sri Lanka for a Test series. I’ll call before bath time to speak to the kids. Love you.

The England Captain’s Wife: It’s not a series. You’re only playing two matches. You can’t call two matches a series. And don’t get sunburnt.

Two does not make a series. Mathematically, a series is many; colloquially, at least several. So what should we call these contests? A double-header? A two-leg tie – no, because the scores are not aggregated across the two matches. A pair – no, term already taken in cricket. A Test brace or couple? Outbound and return?

The two test contest has come in for some criticism as a format suitable for the highest form of the sport. Australia and South Africa exchanged blows in November 2011, ending up all-square with none to play. Almost everyone was left feeling they had been sold short. An opera without a fat lady, a thriller without the resolution. Only those Puritan souls able to take pleasure from leaving while wanting more seemed satisfied.

But, a contest over two tests dates from the very beginning of Test cricket. England’s visit to Australia in 1876/77 culminated with two matches between the countries. None of the players involved knew they were engaging in Test cricket. It’s only through hindsight that the matches were given authentic status. So, perhaps, we shouldn’t look upon it as precedent. Only once more were the Ashes scheduled as a two match affair: 1886/87. Twice more in the nineteenth century England contested over a two game affair – against South Africa.

For the next century, the standard set for a Test cricket contest was a three or a five match series, with occasional one-offs. The only regular exception was when New Zealand hosted England on their way back (although headed in the wrong direction) from an Ashes series.

This all changed in 2001. The expansion of Test cricket to ten nations, biannual ICC competitions and the introduction of a ranking system meant that some top-down order was needed in place of the informal, bilateral arrangements that had determined cricket’s international timetable. The Future Tours Programme Agreement (links to page with a link to the pdf of the FTP Agreement) defined a tour as comprising a minimum of two tests and three one day internationals. The rush to the bottom began. In the last decade, 46% of all tours and 33% of those involving only major nations (i.e. all bar Zimbabwe and Bangladesh) comprised two tests – see chart. 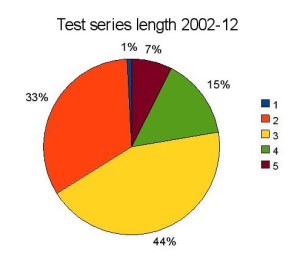 Does an increase in two test tours matter? It could do for any of the following reasons:

The first reason does not stand up to scrutiny: the quantity of Test cricket played in this period is at an all time high. The fourth reason is difficult to evidence but feels a legitimate concern. Last year’s Australian tour of South Africa is an example of a contest that was cut short before it could mature. The second and third reasons are amenable to some analysis.

There were 121 series between major Test nations in the period March 2002-March 2012. The chart shows that the likelihood of a Test match in a

two test tour being drawn was very similar to the likelihood of a draw occuring in a Test match in a three, four or five test tour. However, two-test tours were more than twice as likely to produce drawn series than longer tours. While, on the face of it, there is no evidence of more negative play, the truncated modern tour is leaving contests unresolved.

Note on ‘oxymoron‘: a precise definition of the term is that the two words of opposite meaning are used together intentionally for effect. ‘Two Test Series’ is more precisely a ‘contradiction in terms’.