In at first drop: batting at 3 in ODIs 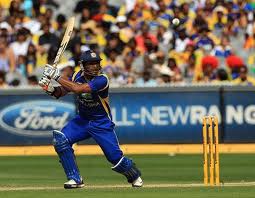 Batting order or batting situation? I believe cricket pays far too much attention to the former and too little to the latter in deciding whose turn it is to bat. I’ve described it before as a personal hobby-horse.

The number three slot in one day international cricket provides a useful testing ground. It’s the only batsman in the order who faces the uncertainty of starting against the second ball of the innings, or the 300th. And in England, there is a debate of passion and parody about Jonathon Trott’s value to the team at number 3.

With the Champions Trophy upon us, I start with a review of which batsmen have the best records at 3 in the last two years of ODI cricket – i.e. since the last World Cup. Three regulars at number three head the table. Sangakkara is the most prolific, with Kohli and Trott clear of a following pack.

The next chart adds the dimension of scoring rate, plotting it against the batting average for the top number three batsmen.

Kohli’s record is very impressive as only one of only three batsman with a strike rate over 80 and the highest batting average. Trott is one of the slower scorers, but not by a significant margin. If he quickened to the median rate (76 runs per 100 balls), in an innings of average duration (51 deliveries) Trott would only score an additional two runs. If he matched Kohli’s pace – the ICC’s ODI player of the year in 2012 – he would score an additional six runs in an average innings.

The charge against Trott is that his game isn’t versatile enough. We can get an insight into the situations a number three faces at the outset of an innings by looking at opening partnership totals and durations in matches since the last World Cup.

The average opening stand is 33, and median score at the fall of the first wicket 19. 31% of opening stands end before the total reaches double figures. Over three-fifths are finished before 30 is on the board. The number three has plenty of opportunity to build an innings and shape his team’s total. 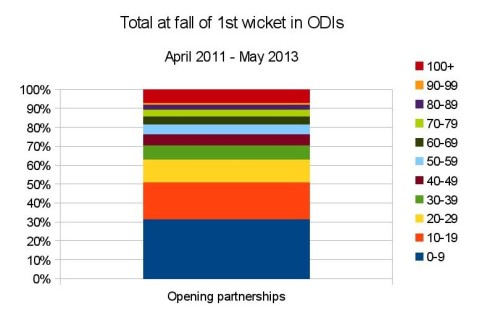 The number three comes to the wicket in the first five overs in 55% of innings and has begun batting before the end of the initial ten over power-play in more than three-quarters of instances. In the majority of situations, therefore, there is an advantage in having the solidity of a conventional top-order player batting at number three.

Looking at average opening partnership duration by team in this period, there is a significant variance (50%) between England at one extreme (51 deliveries) and India (34 deliveries), the lowest of the major nations. Perhaps this is where some of the criticism of Trott gains a little traction: despite beginning his innings after his team has had relatively good starts, his run rate remains on the low side. 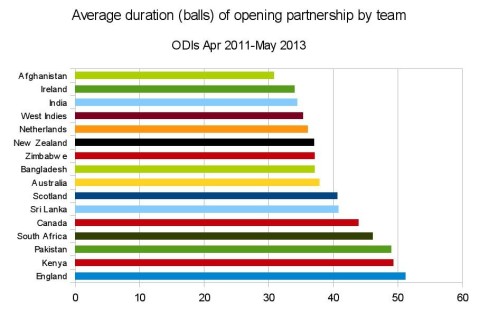 Is there any evidence that ODI sides are sticking inflexibly to their batting order – at least in terms of the number three? To test this notion, I’ve looked at the 21 instances of the first wicket falling after more than 120 deliveries have been bowled and compared who batted at three in that match with the order in the other matches in that series.

In 12 of the innings, the number three was unchanged compared to other games in series. Brendon McCullum, Sangakkara, DM Bravo, Shane Watson and Trott were amongst the batsmen retained at three even when the innings was well under way when the first wicket fell. Pakistan appeared to be the team most willing to shuffle their order according to circumstance, relegating Younis Khan and Azhar Ali behind the likes of Umar Akmal, Abdul Razzaq and Shahid Afridi. New Zealand also used Jacob Oram to add some vim to a couple of solid starts. Of the five longest opening partnerships, three saw promoted number threes, with Trott once being supplanted by Eoin Morgan.

In conclusion, I recognise that my perception of inflexibly applied batting orders, in the case of number three, is not well supported by the evidence. Teams do shuffle the stodgier ‘threes’ when the opportunity arises. However, with opening partnerships rarely providing the innings with a solid base, the continued presence at number three of players such as Trott is justified.

4 responses to “In at first drop: batting at 3 in ODIs”