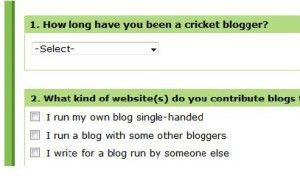 If you are a current or former cricket blogger, please take part in the survey by clicking this link: Cricket blogger survey 2014

Cricket faces commercial, political and governance challenges of an unprecedented scale. The fate of its disparate group of unpaid, online chroniclers is trivia in the grand, complex narrative of the sport. This attempt at some informal research will not uncover answers to any of cricket’s dilemmas, but don’t dismiss the subjects of this survey too quickly.

From my vantage in England, two of cricket’s biggest stories in 2014 have been the surrender of collegiate control of the ICC to ‘the big three’ and the ECB’s efforts to establish a ‘new era’ for the senior men’s team. With the exception of Cricinfo, the professional media in the UK were slow to subject both stories to critical scrutiny, denying for some time that there really was a story – or two sides to that story.

Cricket bloggers have been at the forefront of those challenging the official versions of these stories, applying critical thought to the evidence, asking awkward questions and facilitating the sort of debate that cricket’s authorities might seem to want to suppress.

I do not pretend that cricket bloggers can influence outcomes in the form of the distribution of the cash the sport generates or who leads internationally on and off the field. But surely members of the sport’s mainstream media are beginning to recognise the disdain with which it is held by many of the sports most passionate followers. And won’t this influence them or their publishers? Time will tell.

Declaration Game is three years old, making it early middle-aged in cricket blog terms. Throughout that period, twitter and blogging have combined like Laker and Lock. Brian Carpenter (the blogger’s blogger) of Different Shades of Green, has commented how attracting an audience was more of a waiting than chasing game when he began writing in 2006. For many, twitter is an end in itself, not a marketing tool for wordy material that sits in the background.

Blogging arose as a manisfestation of the self-publishing enabled by the internet. What’s true of the written word has since been played out for the spoken word, still and then moving images. Blogging, in the fashion I practice here, has long (in technology terms) ceased to be cutting edge. Creative cricket followers have quickly adopted the ability to produce and distribute audio and video material.

In 2010, Nishant Joshi’s Alternative Cricket celebrated a high-water mark in cricket writing by featuring the best in independent cricket blogs. Four years later and opportunities have opened up for the most able bloggers to have their work featured on professionally produced platforms: from Cricinfo’s Cordon to The Nightwatchman; from digital only sports magazines to the blogs of media companies and for a very few, Wisden, through its annual Cricket Writing Competition.

Some of the first bloggers have, through their excellence and distinctive voice, made the move to professional sports journalism. Blogging perhaps was always conceived of as a stepping stone to the paid gig. It’s now a prerequisite for any writer who aspires to be paid for his or her words.

Blogging varies (though, perhaps not enough) by topic, writer’s motivation and style. It is not a movement (unlike, for example, the ‘parent blogging’ world that I also inhabit). The danger in surveying something diverse is focusing on the average and missing the range. I’ll try not to do that when I present the results in future posts and I invite anyone who participates to make use of the data to carry out their own enquiries and draw their own conclusions. So, I don’t know what the survey will show. I’m not testing any hypotheses. With other bloggers’ assistance, I may be able to depict aspects of a vibrant, fulfilling activity; or one that is slowly deflating, albeit with some mighty fine writing still being produced.

So, if you do (or used to) create written on-line content about cricket for free, please take part by clicking the link: Cricket Blogger Survey 2014.

Acknowledgements for assistance with the development of the survey: Russ Degnan (@idlesummers), Nishant Joshi (@altcricket) and Neil of Row Z (@RowZ6).