Post number three in this series on the results of the cricket blogger survey considers the state of the sector and where it may be heading.

Economists ask businesses to tell them their investment intentions as a guide to the future state of the economy. Similarly, we might interpret responses to a question about how bloggers see their frequency of posting new content changing over the next year, as an indicator of the health of cricket blogging.

The results, depicted in the heat map below, show there is plenty of energy there: around one-third are looking to post more frequently; another third staying the same; about one-in-twelve will stop completely. 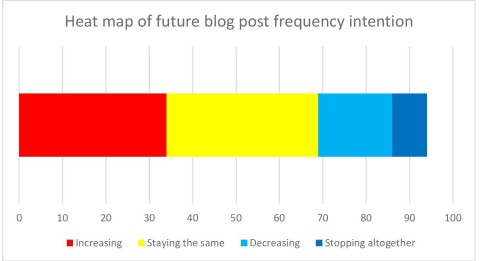 The characteristics of those planning to stop are that they all have daily views below 100; over half are currently posting less often than monthly; all have been blogging for three or more years

Amongst those planning to increase posting frequency there are high proportions of those with 100-499 daily views; blogging vintage of less than one year or 5-9 years; currently posting new material weekly or monthly.

If these plans come to pass, there will be more posts from the more popular sites. The responses to a question posed about the main challenges facing bloggers suggest those plans may not be realised. Time is a main challenge for 74% of bloggers, rising to 79% of those aiming to increase the frequency of posting new material (time is also selected by 78% of those expecting to decrease or stop blogging).

Readership levels are the second most commonly selected challenge, although amongst those reducing their commitment to blogging, a lack of enthusiasm for blogging came second to time.

Respondents were asked to give their views on the current state of cricket blogging. 89 supplied answers, including nine who felt they did not know enough to give an opinion. Those positive about the sector hold a narrow majority, with a substantial minority expressing negative opinions. 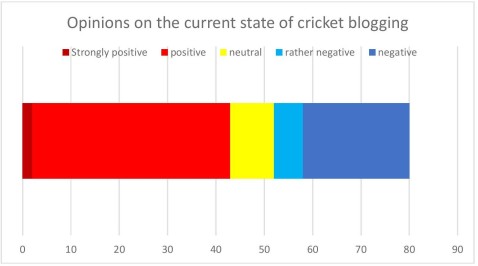 The comments of those pessimistic or critical of blogging mentioned the following factors:

The rise of micro-blogging and podcasting has made blogging an outdated medium. Anything that doesn’t sustain the attention of the easily distracted audience will be read by very few, unless it’s on a major sports website and easy to find.

It has changed since I began, when there was a sense of being a member of a community of bloggers… I think that’s dissipated now

too much focus on topics that get plenty of mainstream coverage

People are not as open to new ideas and want to avoid serious topics altogether. People should be encouraged to embrace new content, different points of views

saturation point has been reached

Another cause for pessimism was the departure of stalwarts from the early days of blogging, some of whom are now writing for professional media – whose infiltration of bloggers is also criticised.

Turning to the respondents who are positive about the state of cricket blogging, there is some overlap with the factors cited by those perceiving the activity to be in decline: e.g. the ease of publicity through social media; cross-fertilisation of the mainstream media with bloggers; and the crowded field:

I like the clamour of voices, and I like the democracy of it… There should be an element of chaos about it too.

Other of the factors mentioned already are contradicted by those who are optimistic:

Whatever you want to read, a little searching can find it for you

It is a jungle with so many bloggers hoping to be noticed but that’s all to the good for the cricket enthusiast.

Much of the cricket blogging that I see and read is actually of a higher standard than the professional cricket journalism that everyone reads.

Many respondents picked up this thread of comparing blogging favourably with the mainstream media:

It is healthy and getting better, and very necessary as cricket journalism in the mainstream media is in serious decline.

The sullied demise of professional cricket writing has created a bit of a vacuum, for me bloggers write the best stuff I read.

Developing this theme further, some respondents found cause for optimism about blogging in the ability of some bloggers to take on the establishment

when issues matter – Big Three; ECB v KP – I feel bloggers have done an exceptional job in holding power to account, far better then mainstream journalists who have been compromised.

This post finishes with some data that may point to some future directions for cricket blogging – a theme that the fourth and final post in this series will develop.

Participants were asked, ‘What kind of assistance or opportunities would you value most in developing your blogging and getting more fulfilment from blogging?’ and given a list of 13 from which to select three.

Three kinds of help were clearly the most popular, each being selected by close to half of all respondents: 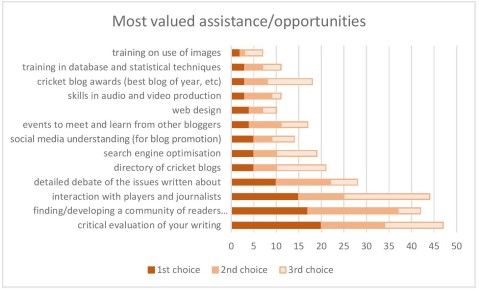 Interest in technical skills to aid blogging or formal organisation of bloggers (awards, meetings) drew some, but not strong, interest.

Bloggers were asked which subjects they would like to see covered by blogs and invited to select up to five of a list of 21. The top ten topics are shown below, with size of font indicating quantity of preference. Cricket history was selected 45 times; player interviews and profiles, 21 times. I hope to rise to the challenge of satisfying the demand for more just, y’know, random stuff.

Blogging is no longer a frontier activity, with other forms of on-line expression preferred by pioneers. It attracted a lot of pessimistic comment. However, the criticisms don’t seem to be associated with reduced commitment from most bloggers. The trajectory of cricket blogging’s rise may have leveled out, but its health doesn’t seem in peril. The challenge most commonly cited by bloggers – time – would probably be the modal response from any group surveyed about their hobby. None of the major challenges identified look as though they pose a grave threat to the activity.

In describing the current state of cricket blogging, the issue that respondents brought up again and again was its interrelationship with the mainstream media. For some blogging is a stepping stone to a career in the media; for others it is the moral high ground from which the media is observed. Blogging can be a thorn in the side of the media or a refuge from the compromises of professional writing. It will be interesting to see if this complex of dependencies and oppositions is resolved in the coming years.

However, there is a danger in writing about blogging as an entity. It’s an individualistic pursuit, with only limited collegiality. That’s a state that bloggers may want to reconsider: should they, whether for their own personal satisfaction, or for the sustainability of the enterprise, attempt some form of loose organisation and mutual help? That may be needed to provide some of the assistance that bloggers report that they would value most.