As Karun Nair surged to a triple-hundred in his third Test innings, commentators dared the Indian selectors to drop the young batsmen for the next Test, when the three more senior players, whose injuries had opened the way for his debut, will have returned to fitness. That’s a recurring selection dilemma – form versus seniority; promise against proven ability. Nair’s situation raises another dilemma, one that I find even more interesting, but suspect selectors do not.

Measurement of the impact of fielders has become topical. It has found official recognition in Cricket Australia’s publication of a fielding index. To appreciate the broader scope of the subject and its potential there’s no better source than Jarrod Kimber’s ESPNCricinfo post, Why doesn’t cricket have proper metrics for fielding?

Now that fielding performance is being subjected to more intense analytical scrutiny, it follows that its impact on batting and bowling performance also needs to be understood. This post presents some options for adjusting batting statistics to take account of certain aspects of fielding performance, drawing on data collected from the India v England series and reported in the Declaration Game post, A series of missed opportunities.

The end of series batting tables showed the dominance of Virat Kohli, the impact of Nair’s mammoth innings and the continuing prolific run-scoring of Root, Pujara, Bairstow and Vijay. But in a series of 49 dropped catches and missed stumpings, how dependent were the batsmen on the competence of the fielders? I have assessed the impact of missed chances on the output of the 18 players who scored more than 100 runs across the series.

42 missed chances were distributed across these 18 batsmen. No distinction is made between chances of different levels of difficulty. All chances that went to hand (or body), or flew between fielders stationed close together are counted, but not those that looped just out of reach or through areas where one might have expected captains to have placed fielders. Also excluded are missed run outs and missed opportunities relating to umpiring decisions or to the operation of the Decision Review System.

The bar to the far right of the chart represents Alastair Cook who benefited from the highest number of misses: six; Ben Stokes is one place to his left.

More interesting than a count of drops is how the missed chances impacted on batting performance. A measure of this is the number of runs scored, had each of the innings ended when the batsman gave their first chance. The full height of the column in the graph below shows the total number of runs scored by the player in the series. The filled blue part of the column shows the number of ‘chanceless’ runs accumulated by each batsman; runs scored after a missed chance are depicted by an unfilled (white) area.

On this measure, Root supplants Kohli as the most prolific batsman in the series, with the Indian captain falling to third place behind Pujara. Nair and Jennings have the highest proportion of their runs bitten off by this metric. At the other extreme, Rahul and Patel were unaffected having not benefited from any missed chances.

With four comfortable victories, India’s batsmen had fewer innings than England’s. Standardisation can be achieved by converting the measure into a batting average – the ‘chanceless’ average – by dividing by the number of dismissals. 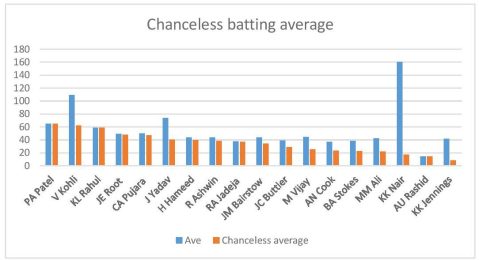 Patel, Kohli and Rahul are the three players who maintain ‘chanceless’ averages (orange columns) above 50. Kohli’s average when only chanceless runs are counted falls 43%. But it is Nair with the steepest drop from a conventional average of 160 to just 17.

By including only the runs scored before giving the first chance of an innings, this measure has the drawback of giving no credit for runs that played a part in the match result. I have calculated a second alternative measure of batting performance: the batting average per chance (orange columns). Total runs scored are divided by dismissals plus missed chances.

Kohli, the dominant figure of the series with the bat, returns to the top of the list, followed by Patel. Nair, showing how he made England pay for their errors in the 5th Test, rises to third-place. Cook is near the bottom of the list, having managed just 23 runs per chance.

Adjusting measures of batting performance in this way offers some insights: it shows how certain players’ success relied upon the opposition making fielding errors, while others enjoyed no good fortune of that kind at all, and some failed to capitalise on the good luck that came their way. In this series, there is also a pronounced levelling out of individual batting performance when chances given are taken into account. The range for batting average of the players in this sample fell from a factor of 11 separating top from bottom with conventional batting average, to eight using the chanceless batting average. This type of analysis may, with a far larger sample, start to factor out elements of luck in batting performance measures.

A single Test match series does provide far too small a sample for drawing statistically robust conclusions. Yet, it is exactly the sample most pressing on the attentions of international team selectors, particularly when assessing the contribution of players new to the Test arena. My contention is that selectors and other observers are better served by a batting measure that attempts to control for the varied dose of luck experienced by players than the conventional and crude batting average.