King of the jungle 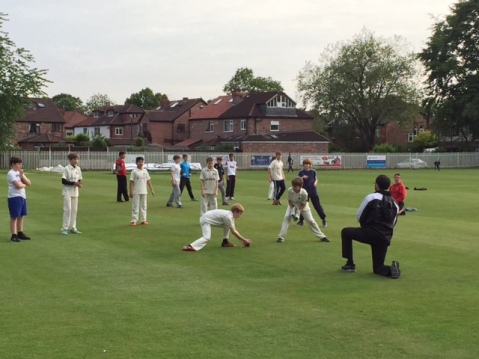 There are ten minutes left of the session. Parents are milling in increasing numbers in front of the pavilion. Grey clouds gather above the far end of the field. They look ready to join forces with the parents, chasing the players off the ground, into their cars and away home.

It’s been a typical session: my efforts at coaching have engaged some, been tolerated by others and steadfastly rejected by a few more. And I’ve miscalculated: the net competition and small team games have wound up early. My charges – twelve, thirteen years old – have detected my loss of impetus. Some stand or kneel beside their cricket bags, inadequate cover for some rapid, digital social networking. Another group improvise a game, with bat and ball, too close to the parents and younger siblings for safety. A couple of boys, outside of the main cliques, paw the turf with their trainers, avoiding eye-contact, suffused by teenage awkwardness.

I take the bat and ball from the game-players; issue some shouts to gain attention; then sparse words of instruction and I have an 180o arc of cricketers, in single rank, equally spaced, around me. I toss balls, which are caught and returned. Each player stands poised, with knees slightly bent, torso inclined towards me, hands ready to grasp and cup the ball. Matching the physical attitude is a unity of purpose, a keen attention.

I start to hit the ball with the bat. Jumping, one-handed, toppling forward, the catches are taken to the accompaniment of murmurs and calls of approval. The ball bounces off the heel of a hand. The unlucky fielder spins away and moves to the far end of the arc. Everyone else shuffles around. Brief celebrations and the focus returns.

The competition is to be the king, at the top of the arc, with the safest hands and the deepest drop should a chance be mishandled. This group has claimed the game as its own, importing from their biology class a crude hierarchy of existence, with the king at the top, then stepping down, through the animal kingdom, to the lowly, butter-fingered worm.

It is the pace, and the immediate risk and reward of this simple game that galvanise what had minutes before been a haphazard, distracted group of junior cricketers. And I’m transformed too, suddenly communicative and playful. I swap my role with a long-term king and join the arc at its low-point, ready to test my reflexes and accept the youngsters’ verdict.

The ten minutes are devoured. Spots of rain fall but are not remarked upon. Parents try to attract their children’s attention, to get them to withdraw from the game. Any let-up in the serving of catches is hooted and derided. Two more minutes, we agree.

The team’s match this week will pass without a single slip catch accepted or offered. The virtue of this game is immediate and is found in the smiles, boasts and camaraderie of a shared experience that will bring these youngsters back again next week to cricket practice.