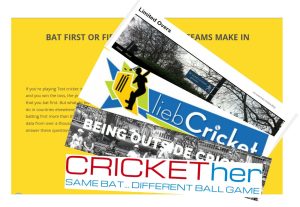 Purpose: to draw attention to the most interesting, insightful and amusing independent cricket writing.

Format: a prose review, structured around a list of eleven selected posts, without clever (or laboured) analogies to the selection of a cricket team.

Criteria: posts published on-line, with authors (to the best of my knowledge) unpaid and having not appeared in any of the five previous Declaration Game annual select XIs. Ultimately, each selection is nothing more than my subjective judgement of what is interesting, insightful or amusing.

The select XI for 2017 begins where almost all cricketers start (and most remain): the grassroots. Being Outside Cricket is a multi-blogger site created by the blogger known as Dmitri Old (select XI 2012). The post ‘Community Service‘ by thelegglance, extols the virtues of club cricket’s dedicated servants before, wholly in keeping with the tenor of the host blog, turning its ire on the cricket establishment:

The rarefied atmosphere of the highest level of any sport is a world away from the day to day that makes up virtually all of the game.  Yet professional sport relies on the amateur to a far greater extent than the other way around, even though they both need the other for it to flourish.  But take away professional cricket, and the game would survive.  Take away amateur cricket and there is simply no game at all, which is why the dismissive behaviour towards it remains one of the more despicable attitudes pervading the corridors of power.

John Swannick moderates a LinkedIn group for club cricket administrators, on which he posted a link to an article by the former Chair of Westinghouse CC. This piece was the most compelling long read of the selected XI. It tells the story of the decline of the club from a thriving institution enjoying on-field success to, within a matter of years, folding.

The warning signs had been creeping into the club for the last four or five years. As players left it became harder & harder to find replacements. As volunteers reclaimed their free time, it became impossible to find others willing to step up. Committee roles became something people recoiled at the thought of.

But as much as we can pinpoint the cause of the apathy, & believe me I do share the feelings of our members, it cannot hide the cold facts. Not enough of our members cared enough about the club to see it through to the end. Too many egos skulked behind rocks & into hiding when a once proud club was relegated not once but twice in the space of a few years. When the time was right to fight for the club & return it to glory, too many seized the opportunity to desert the ship before it sank further.

I doubt any cricket club official in the UK could have read this piece without recognising some aspect of their own club in the meticulously related account of Westinghouse CC’s fall. An uncomfortable, but important read.

A quick change of pace: satire. In the spring, That Cricket Blog wrote a county championship preview, extrapolating the excesses of 2017 to the competition in 20 years’ time – 2037; for example:

Dan Liebke has an excellent sense of the ridiculous, which comes across well on Twitter and in the podcasts to which he contributes. I have, though, tended to struggle to get past the sub-title on his liebCricket header (“funny cricket > good cricket”) but was glad I did when he wrote about the end to the 3rd England v South Africa Test.

And yet Joel Wilson – a lateral thinking marketing genius disguised as an umpire – found a way to top it.

One of the strongest features of cricket blogs in 2017 was the quality of statistical pieces. Fielding analysis came to the fore. Kesavan trawled through ball-by-ball commentary of 233 Test matches to gather the material for the most comprehensive analysis of slip-fielding that I suspect has ever been published – with breakdowns by bowler type, position, country and individual fielder (Steve Smith and Kane Williamson come out on top).

Paul Dennett had a similar interest and no less an obsession. Dennett introduces Fielding Scores for every player in IPL 2017 thus:

The lack of any worthwhile fielding statistics has always bothered me.

So for this edition of the IPL I tried to do something about it. I’ve spent the last few weeks reviewing every ball of the group stage of the tournament, creating 1,666 entries in a spreadsheet for all the fielding ‘events’.

It has been an absurd amount of fun.

Data visualisation is an adjunct field to statistics and of ever increasing importance. The strongest example I came across in 2017 was the blog post ‘Bat first or field. The choices teams make in Test cricket‘. It uses a background the colour of a Wisden dust jacket, over which charts, maps and monochrome photos slide in and out of view, as the data and its interpretation gradually unfolds.

Charles Davis is a doyen of cricket statisticians, with a prodigious output of analyses, lists and reports on Z-score’s cricket stats blog. One thrust of Davis’s work is to fill the gaps in 19th and early 20th century match records, by using newspaper archives to recreate the detail with which we have only recently come to expect of the recording of international fixtures. In ‘The Odd Fields of the Early Days‘, Davis has surmised, by studying reports in The Times, where the fielders were positioned at the start of the innings in fourteen late 19th century Tests, illustrating how in 1893, Johnny Briggs bowled to a field with five players positioned between mid-off and mid-on.

Raf Nicholson is also a cricket historian, specialising in women’s cricket, and a moving force behind the CricketHER website. In February, Nicholson published her ‘Thoughts on the batter/batsman debate‘. Her contribution is of note not just because of the side she takes, but because of her command of historical source material. The post also very neatly encapsulates one of the challenges facing girls and women’s cricket: whether the game’s growth will come with closer alignment to the men’s game or striking out and creating a distinctively new sport.

Recent history is the subject matter of That 1980s Sport Blog. Steven Pye’s post on the 1984 County Championship was as entertaining as this introduction promises:

The script would involve an underdog who nearly became a hero; a substitute fielder earning himself legendary status for a county that he never played for; panic on the streets of Chelmsford; a case of so near, yet so far for one team, and unadulterated delight for another. There might not be the angle of a love interest, but come the end of September 11, 1984, Keith Fletcher would quite probably have kissed Richard Ollis in relief.

My eleventh choice comes from Matt Becker’s Limited Overs blog. Becker has woven the personal story with the public cricket narrative as effectively and affectingly as anyone. This was hard, it was fun was Becker’s resurfacing after a one year absence from the blog.

And so I came back here. To write about this game I remembered that I loved, and to get away from the book I don’t want to think about anymore, and to keep writing in a space where I feel comfortable.

Becker fulfils that aim throughout the English/US summer of 2017 until, marking the final day of the England v South Africa series, he discloses his motivation for returning to the blog. It is moving and meaningful blogging.

Limited Overs is one of five blogs in the selection – the others are Being Outside Cricket, liebCricket, Z-score’s cricket stats blog and cricketHER – which published regularly during the year and from which selection of a single post was more difficult. I would encourage readers to spend some time visiting each and find their own favourite.

Last year, I introduced – ironically in terms of my appropriating the title, but genuinely in terms of my appreciation of the blog – the World’s Leading Blogger citation, which (as in Wisden) doesn’t restrict me to mentioning those who have not featured in previous years’ Select XIs. I nominated Backwatersman’s New Crimson Rambler and have come very close to announcing his retention of the WLB status for 2017.

Top of the tree, however, as my favourite blog and nomination for World’s Leading Blogger of 2017 is Peter Hoare’s My Life in Cricket Scorecards. Throughout the UK summer, Hoare blogged weekly about the parallel events – cricket and otherwise – of the summer of 1967, when as a young boy he had seen his home county challenge for honours and win the Gillette Cup. The material was fascinating, the writing crisp and the treatment of that earlier time both respectful and questioning. On top of all of that, the delivery through a cricket blog of a sustained project has taken the medium somewhere new and – for anyone with Hoare’s dedication – fertile.

Please read, share, disagree and generally engage with these and the many other independent cricket writers out there on the web.